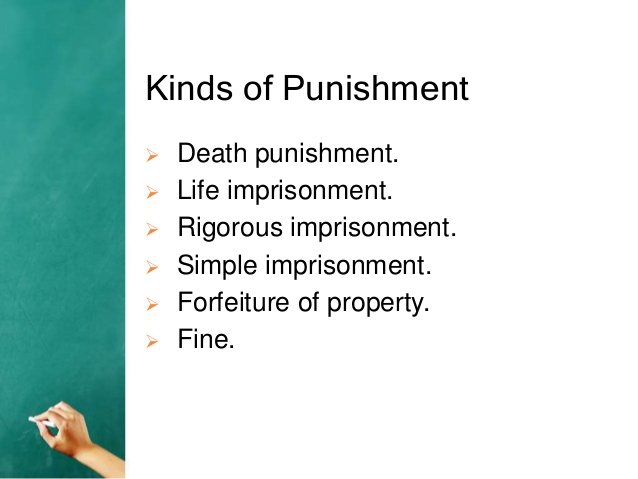 According to Section 53 of the Indian Penal Code, the PUNISHMENT UNDER IPC which can be given to the offenders under this Code are-

KINDS OF PUNISHMENT UNDER IPC

Death Sentence is defined as the execution of the offender for the offence committed by him. It is also referred as Capital Punishment.It is the highest degree of punishment that can be awarded.  As per the Amnesty International survey, the report of July 2018 , 56 countries accept capital punishment and 106 countries have completely ended capital punishment for all crimes.

5) Punishment for murder by life convict(Sec 303)

7)Attempt to murder by a person under sentence of imprisonment for life,if hurt is caused(Sec 307)

In Simple imprisonment offender is confined to jail but he is relieved from any kind of work.Simple Imprisonment is awarded for small offences like wrongful restrint defamation etc.

Fine is derived from the Latin word ‘finis’ and is so-called because its payment puts an end to the offence for which it is imposed. Fine is a sum ordered by the Court in the exercise of criminal jurisdiction to pay as a punishment for an offence. Fine may be sole punishment or alternative or it may be in addition to the imprisonment.

According to Section 63 of the Indian Penal Code , where no sum is expressed to which a fine may extend,the amount of fine to which the offender is liable is unlimited, but shall not be excessive.

FAQs Regarding PUNISHMENT UNDER IPC

What are the Different types of criminal punishment in India Under IPC?

There are five different kinds of punishments awarded by the Indian Penal Code, 1860 under Section 53.

Which Section of IPC defined Punishment for Crime?

PUNISHMENT UNDER IPC defined under section 53 of Indian penal code, 1860.

What is the means of Imprisonment for Life?